Chocolate mousse or “mousse au chocolat” as the French would call it, is a classic and timeless dessert. This version, called salted butter caramel-chocolate mousse(phew!), is anything but ordinary. It’s just as classy and timeless, but this caramel chocolate mousse is also sultry and fun. And it might be better than the original, but you be the judge!

What is Salted Butter Caramel-Chocolate Mousse?

In French, this dessert is called Mousse au Chocolat au Caramel au Beurre Sale. That is quite a mouthful, which is saying something since the American version is already long. This is a classic chocolate mousse, but it also has fleur de sel and caramel sauce.

This recipe is inspired by David Lebovitz’s recipe…which I actually haven’t read. But I watched him make a version of this dessert on Milk Street, so I decided to use the general idea to make my own. And. It’s. Delicious.

How to Make Caramel-Chocolate Mousse

How to Fold in Egg Whites

Folding in egg whites in a super important step in this recipe. The egg whites lighten the salted butter caramel-chocolate mousse, giving it that mousse quality we love so much.

To fold in the whites, it’s almost always best to stir in a quarter of the whites first. This might deflate that quarter of whites, but it lightens the mousse enough so that the rest of the egg whites are easy to fold in without deflating them as well.

Turn the bowl, and repeat until all of the whites are incorporated.

How to Make Smooth Chocolate Mousse

Sometimes mousse desserts look like they have little white flecks through out them. This is because the egg whites have been over-whipped and became grainy.

To avoid this problem, only whip the egg whites to soft peaks. Medium peaks may be okay if they are more toward the soft side, but stiff peaks are a no-no!

To test for soft peaks, dip your whisk in the whipped whites and bring your whisk upright. The tip of the whites should fall over to the side easily without holding any real shape. If the whites hold their shape a little, they should still be okay, but whip no further. It is best, however, if they don’t hold a shape.

Lastly, don’t whip your whites UNTIL you need them. They will need more whipping if you whisk them too far in advance, and this can cause them to turn into grainy whites because some of the whites will become overworked by the second whisking.

Hi, I’m Camille! I'm a professionally trained pastry chef with a passion for food photography & styling, travel, cookies, all things French, and skiing. I spend my days raising 3 amazing kids while baking and photographing desserts on the daily.

Learn More About Me 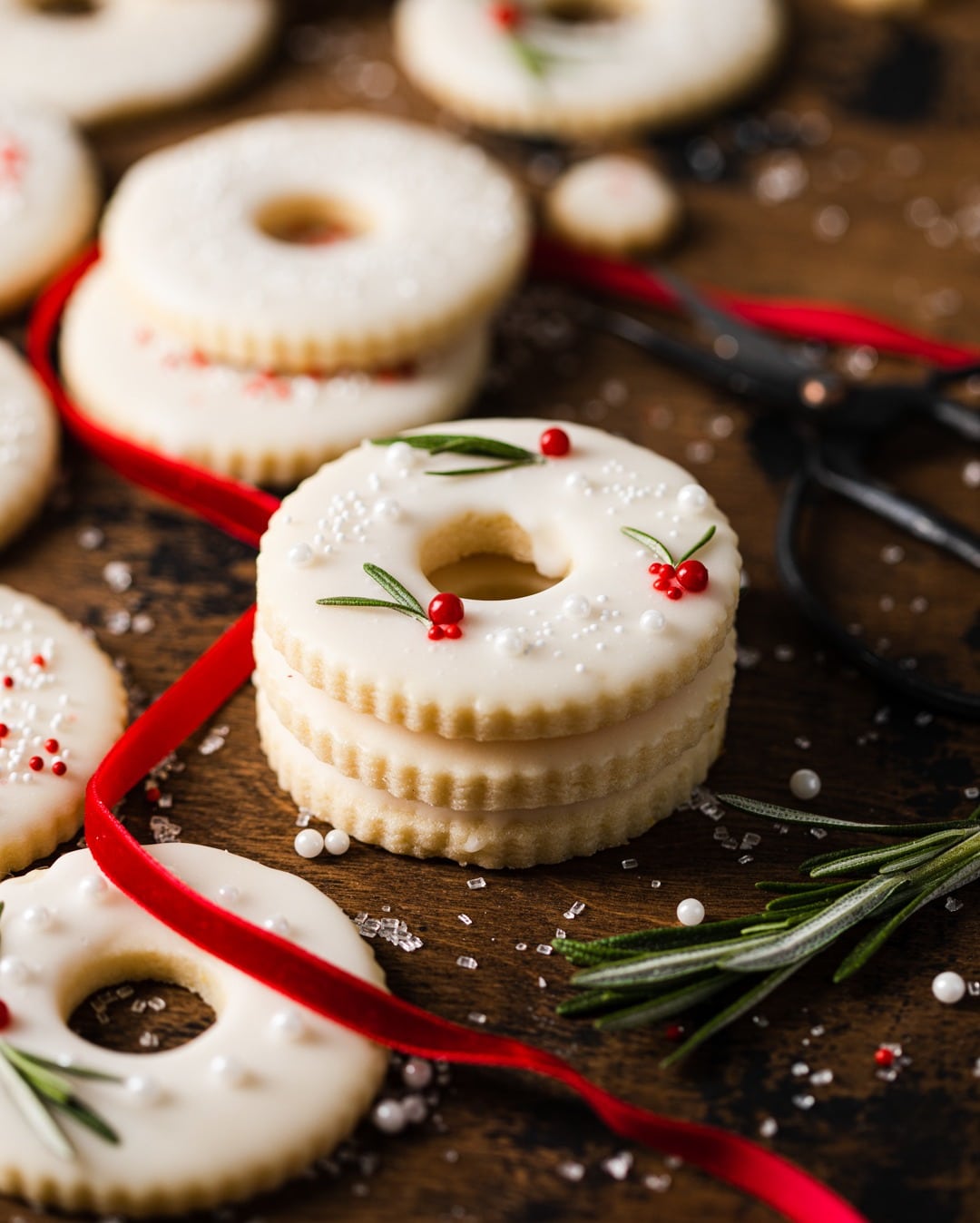 bakerstreetsociety
•
Follow
Happy New Years! Out of all of my photos from 2021, this Lemon wreath cookie photo is in my top 3 favorites! ⠀⠀⠀⠀⠀⠀⠀⠀⠀ ⠀⠀⠀⠀⠀⠀⠀⠀⠀ I hope your new year is filled with everything good, even when things are difficult. Because let's be real, even our best years still have challenges. And they only make us better if we let them.⠀⠀⠀⠀⠀⠀⠀⠀⠀ ⠀⠀⠀⠀⠀⠀⠀⠀⠀ I'm taking a break from Instagram for the next 2-3 weeks. I believe it's COMPLETELY healthy to take a break, step back, reassess, and make sure we are posting and doing all of this in a healthy way. ⠀⠀⠀⠀⠀⠀⠀⠀⠀ ⠀⠀⠀⠀⠀⠀⠀⠀⠀ I'm not playing Instagram's game this year or living under that impending pressure of having to get another piece of content out every day. I'll be posting regularly, but not every day if it doesn't make sense with what I'm working on. ⠀⠀⠀⠀⠀⠀⠀⠀⠀ ⠀⠀⠀⠀⠀⠀⠀⠀⠀ What I'm really trying to say is that Baker Street Society is meant to be a source of help, teaching, and empowerment. And I'm going to focus on THAT, not on follower count or popularity. Social media can begin to control how we focus our work, and I don’t like that. At the end of the day, I want to make a difference in a real way.⠀⠀⠀⠀⠀⠀⠀⠀⠀ ⠀⠀⠀⠀⠀⠀⠀⠀⠀ So when you see me in a few weeks, it's most definitely going to be different, intentional, and done with more purpose. See you all shortly, and have a wonderful January!⠀⠀⠀⠀⠀⠀⠀⠀⠀ ⠀⠀⠀⠀⠀⠀⠀⠀⠀ Oh, and the recipe is in the link in my bio for these delicious cookies. Cheers 🥂 ⠀⠀⠀⠀⠀⠀⠀⠀⠀ ⠀⠀⠀⠀⠀⠀⠀⠀⠀ #bakerstreetsociety #feedfeed #thebakefeed #dessertstylist #dessertstyling #foodartblog #foodfluffer #tohfoodie #hautecuisines #imsomartha #damnthatsdelish #feedfeedbaking #f52grams #bakedfromscratch #lemoncookies #lemon #lemondesserts #fotograficamentefoodstyle
View on Instagram |
1/9 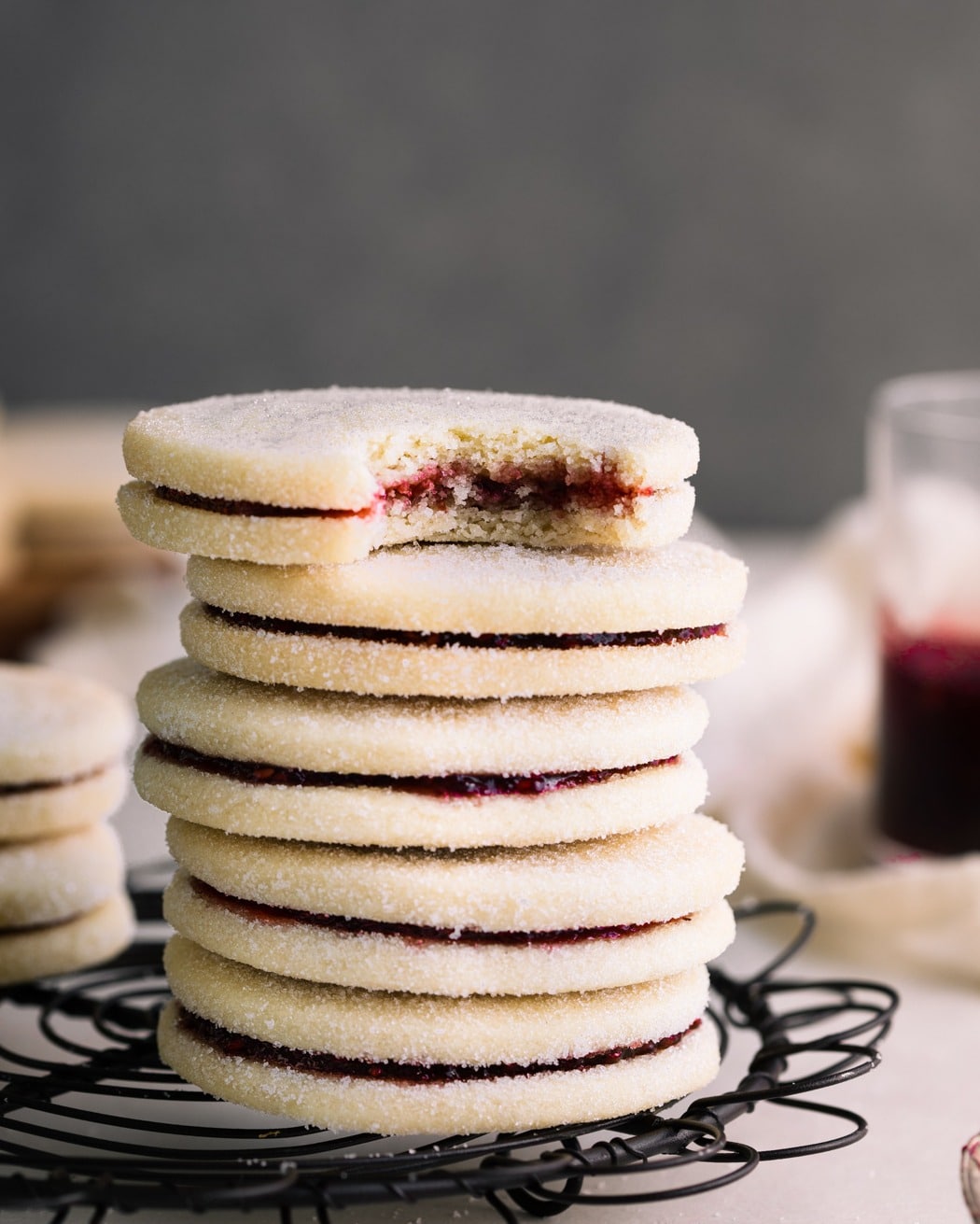 bakerstreetsociety
•
Follow
It's the last day of 2021, and I'm so excited to seal up my summary of everything that has happened and burn it ceremoniously! ⠀⠀⠀⠀⠀⠀⠀⠀⠀ ⠀⠀⠀⠀⠀⠀⠀⠀⠀ What can I say about 2021? I have learned and grown as a recipe developer, baker, and food photographer at a very rapid pace this year. Even though I have training as a pastry chef, there are some things that only come with time and experience. ⠀⠀⠀⠀⠀⠀⠀⠀⠀ ⠀⠀⠀⠀⠀⠀⠀⠀⠀ Things I've learned this year- the answer will always be NO unless you try. You will always fail if you never try. You will succeed far more often...if you just try! ⠀⠀⠀⠀⠀⠀⠀⠀⠀ ⠀⠀⠀⠀⠀⠀⠀⠀⠀ Our ability to become who and what we want to be is absolutely possible. It might require a lot of time and effort, but most things that are worth having require effort and time.⠀⠀⠀⠀⠀⠀⠀⠀⠀ ⠀⠀⠀⠀⠀⠀⠀⠀⠀ There are days when recipes don't come together as expected, and days when photos aren't turning out as envisioned. Can you relate? It's on those days that I remind myself how important those learning experiences are, and then allow those experiences teach me instead of wallowing in discouragement.⠀⠀⠀⠀⠀⠀⠀⠀⠀ ⠀⠀⠀⠀⠀⠀⠀⠀⠀ There have been lots of challenges both business wise and personally, but lots of wins too! Thank you all so much for your support and DMs and comments. It's those "golden" DMs when one of you lets me know how one of my recipes has changed your life, and that just adds fuel to the fire and pushes me to keep developing quality recipes that work. ⠀⠀⠀⠀⠀⠀⠀⠀⠀ ⠀⠀⠀⠀⠀⠀⠀⠀⠀ So here's to closing out a good year and moving onto an even better year! I hope you have a happy and safe New Year's Eve. See you in 2022! ⠀⠀⠀⠀⠀⠀⠀⠀⠀ ⠀⠀⠀⠀⠀⠀⠀⠀⠀ #bakerstreetsociety #feedfeed #thebakefeed #dessertstyling #foodartblog #foodfluffer #tohfoodie #hautecuisines #imsomartha #damnthatsdelish #wsbakeclub #feedfeedbaking #f52grams #bakedfromscratch #sandwichcookies #almondcookies #raspberrycookies
View on Instagram |
2/9 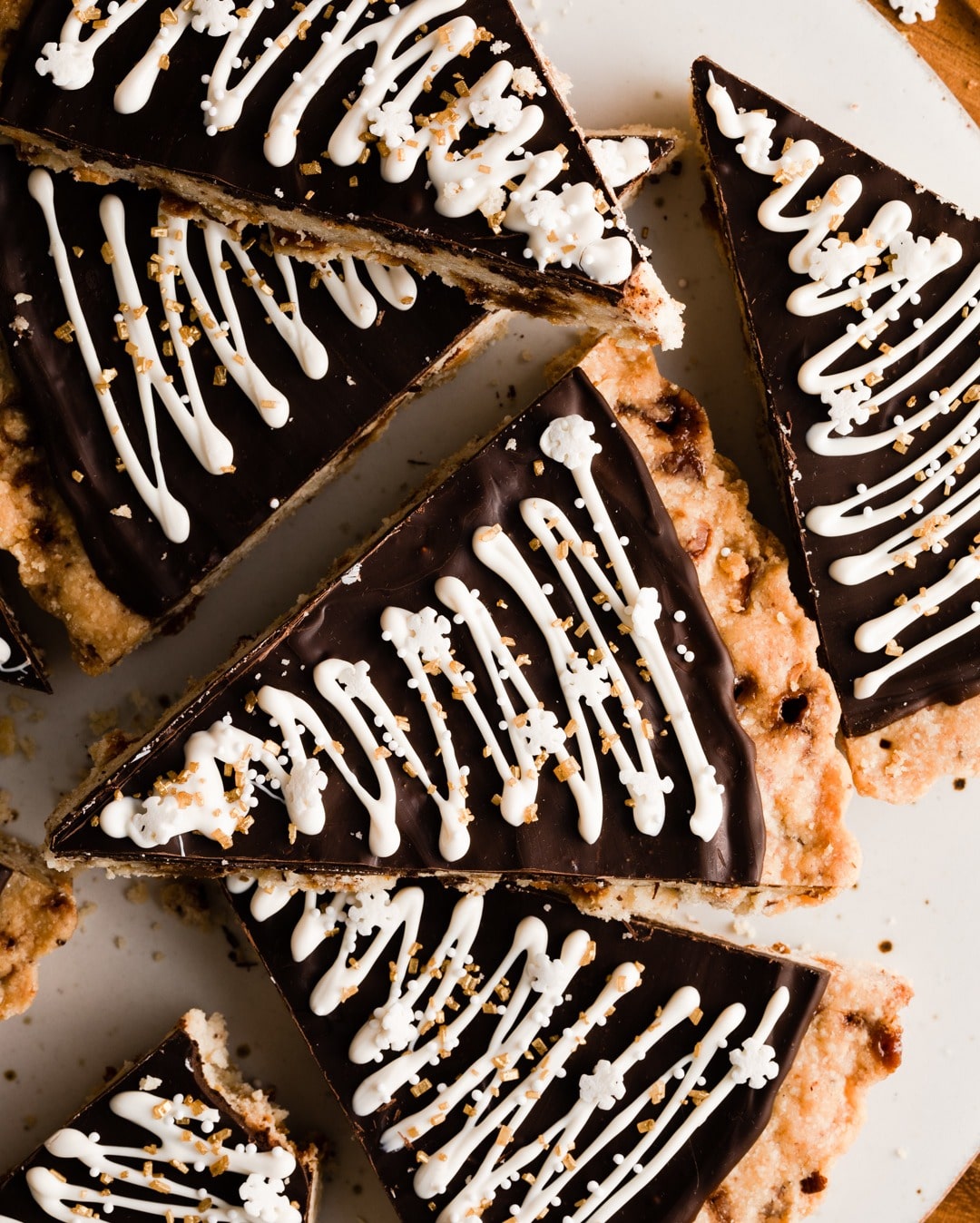 bakerstreetsociety
•
Follow
Who doesn't love a good piece of shortbread? Especially when it's dotted with bits of caramel toffee and salty pecans! Another favorite of 2021.⠀⠀⠀⠀⠀⠀⠀⠀⠀ ⠀⠀⠀⠀⠀⠀⠀⠀⠀ Is anyone else excited for 2022? I've got a feeling it's going to blow 2020 and 2021 away. Maybe that's just my optimism speaking, but better that than being a negative nancy!⠀⠀⠀⠀⠀⠀⠀⠀⠀ ⠀⠀⠀⠀⠀⠀⠀⠀⠀ Recipe is in my bio. Have a wonderful day! ⠀⠀⠀⠀⠀⠀⠀⠀⠀ ⠀⠀⠀⠀⠀⠀⠀⠀⠀ #bakerstreetsociety #feedfeed #thebakefeed #dessertstylist #dessertstyling #foodartblog #foodfluffer #tohfoodie #hautecuisines #imsomartha #damnthatsdelish #wsbakeclub #feedfeedbaking #f52grams #bakedfromscratch #shortbreadcookies #shortbread
View on Instagram |
3/9 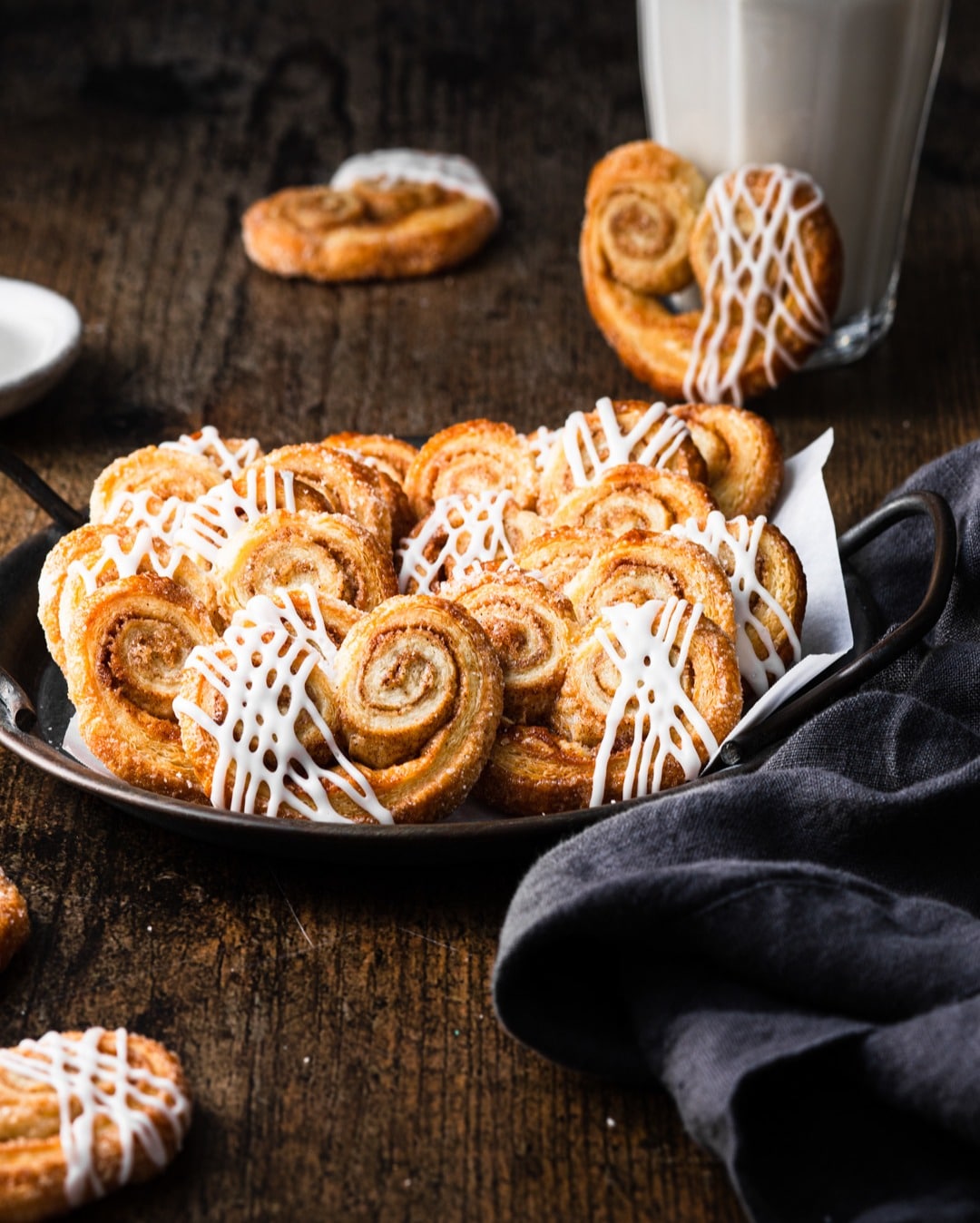 bakerstreetsociety
•
Follow
Another fan favorite today! Cinnamon palmiers always hit the spot. It's a cookie and a pastry, and so incredibly delicious. ⠀⠀⠀⠀⠀⠀⠀⠀⠀ ⠀⠀⠀⠀⠀⠀⠀⠀⠀ I think I need a few of these to munch on while I am planning out my 2022 business goals, recipes, and content. Are you busy setting goals for next year? ⠀⠀⠀⠀⠀⠀⠀⠀⠀ ⠀⠀⠀⠀⠀⠀⠀⠀⠀ I don't just do year goals. I set big goals, and then I have monthly, weekly, and daily goals. And I reassess them every few months to see if those goals still fit. ⠀⠀⠀⠀⠀⠀⠀⠀⠀ ⠀⠀⠀⠀⠀⠀⠀⠀⠀ And I just have to share one of my goals that I have been working on almost this entire year- I made it a goal to do Duolingo to continue studying and learning French every day this year, and I am on a 356 day streak! ⠀⠀⠀⠀⠀⠀⠀⠀⠀ ⠀⠀⠀⠀⠀⠀⠀⠀⠀ If you know me at all, then. you know I'm a Francophile (a lover of all things French), because of my rich French heritage, so studying French just seems natural!⠀⠀⠀⠀⠀⠀⠀⠀⠀ ⠀⠀⠀⠀⠀⠀⠀⠀⠀ On that note, go grab the recipe for these French palmiers in my bio, and think about your goals and dreams for next year. ANYTHING is possible. You just have to believe it and want it enough! ⠀⠀⠀⠀⠀⠀⠀⠀⠀ ⠀⠀⠀⠀⠀⠀⠀⠀⠀ #bakerstreetsociety #feedfeed #thebakefeed #dessertstylist #dessertstyling #foodartblog #foodfluffer #tohfoodie #pastryartsmag #hautecuisines #imsomartha #damnthatsdelish #wsbakeclub #feedfeedbaking #f52grams #bakedfromscratch #palmiers #puffpastry
View on Instagram |
4/9 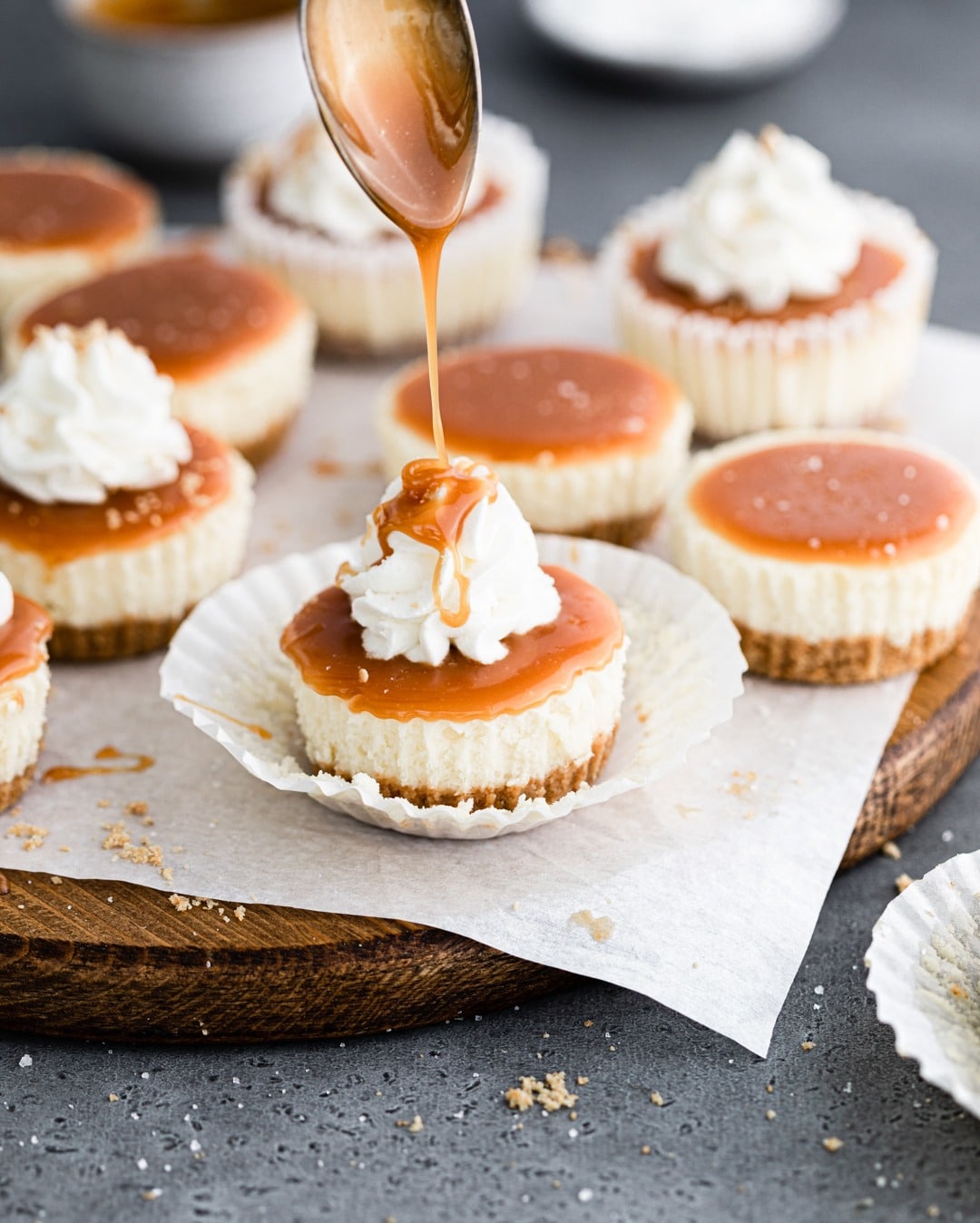 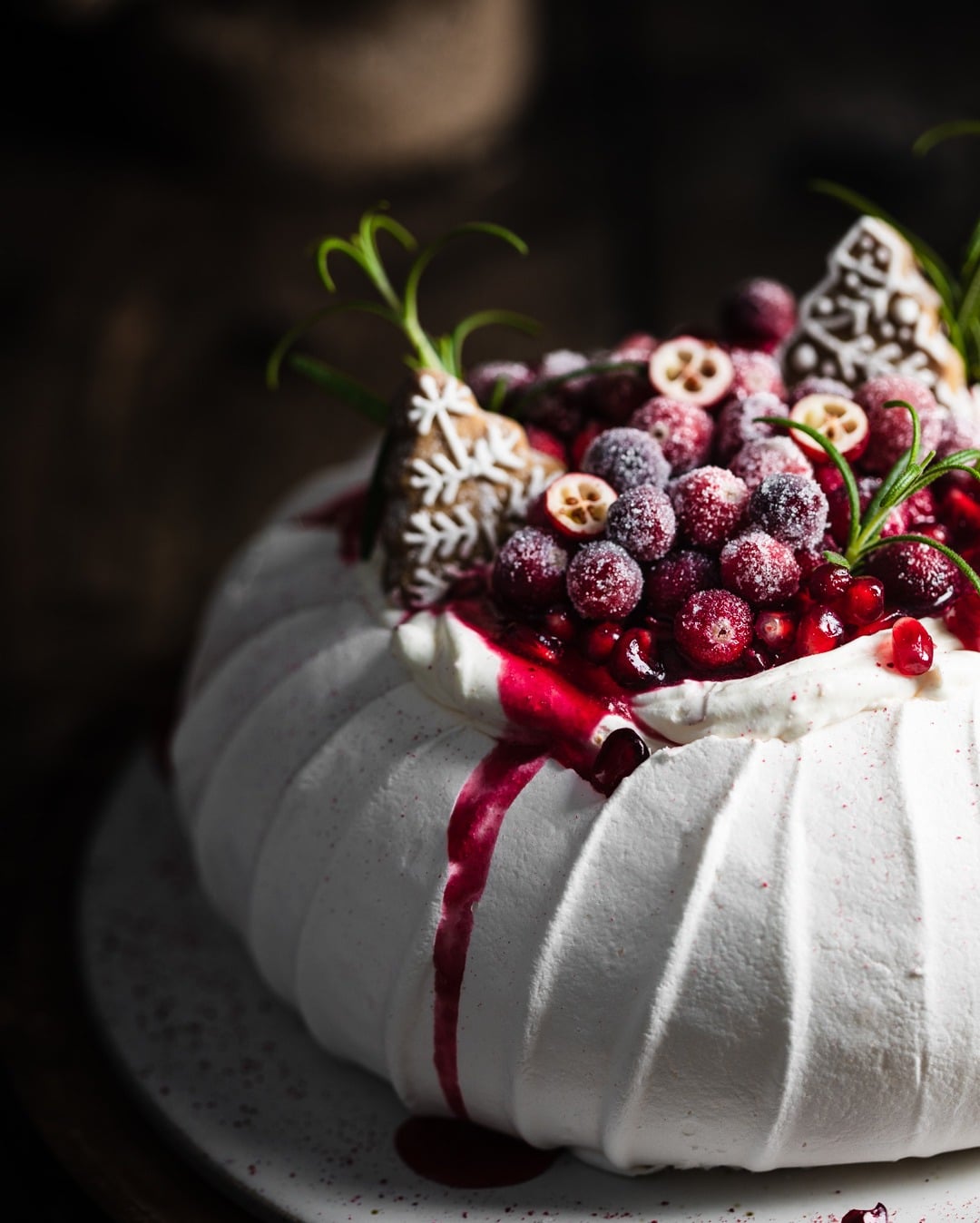 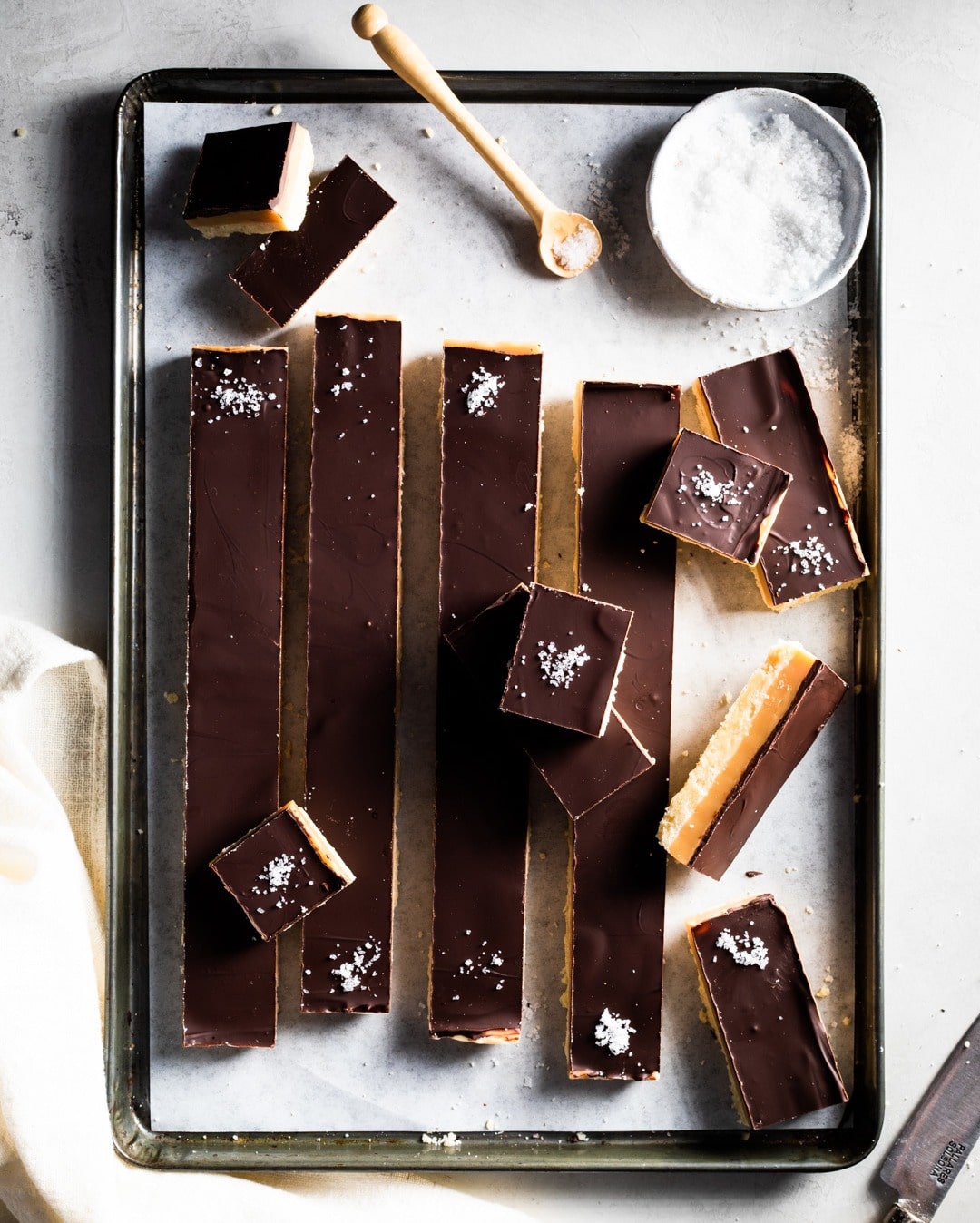 bakerstreetsociety
•
Follow
Millionaire shortbread bars...my absolute FAVORITE Christmas treat. I make at least one pan every holiday season...and consume 90% of the batch allllll by myself. 🥰⠀⠀⠀⠀⠀⠀⠀⠀⠀ ⠀⠀⠀⠀⠀⠀⠀⠀⠀ I know everyone is very busy today, so I just wanted to wish you all a Merry Christmas Eve and hope your day is filled with joy and festivities!⠀⠀⠀⠀⠀⠀⠀⠀⠀ ⠀⠀⠀⠀⠀⠀⠀⠀⠀ And if you need a last minute dessert, make these shortbread bars. Everyone will love you for it! Get the recipe in the link in my bio as usual. ❄️⠀⠀⠀⠀⠀⠀⠀⠀⠀ ⠀⠀⠀⠀⠀⠀⠀⠀⠀ #bakerstreetsociety #feedfeed #thebakefeed #dessertstyling #foodartblog #foodfluffer #tohfoodie #hautecuisines #imsomartha #damnthatsdelish #wsbakeclub #feedfeedbaking #f52grams #bakedfromscratch #millionaireshortbread
View on Instagram |
7/9 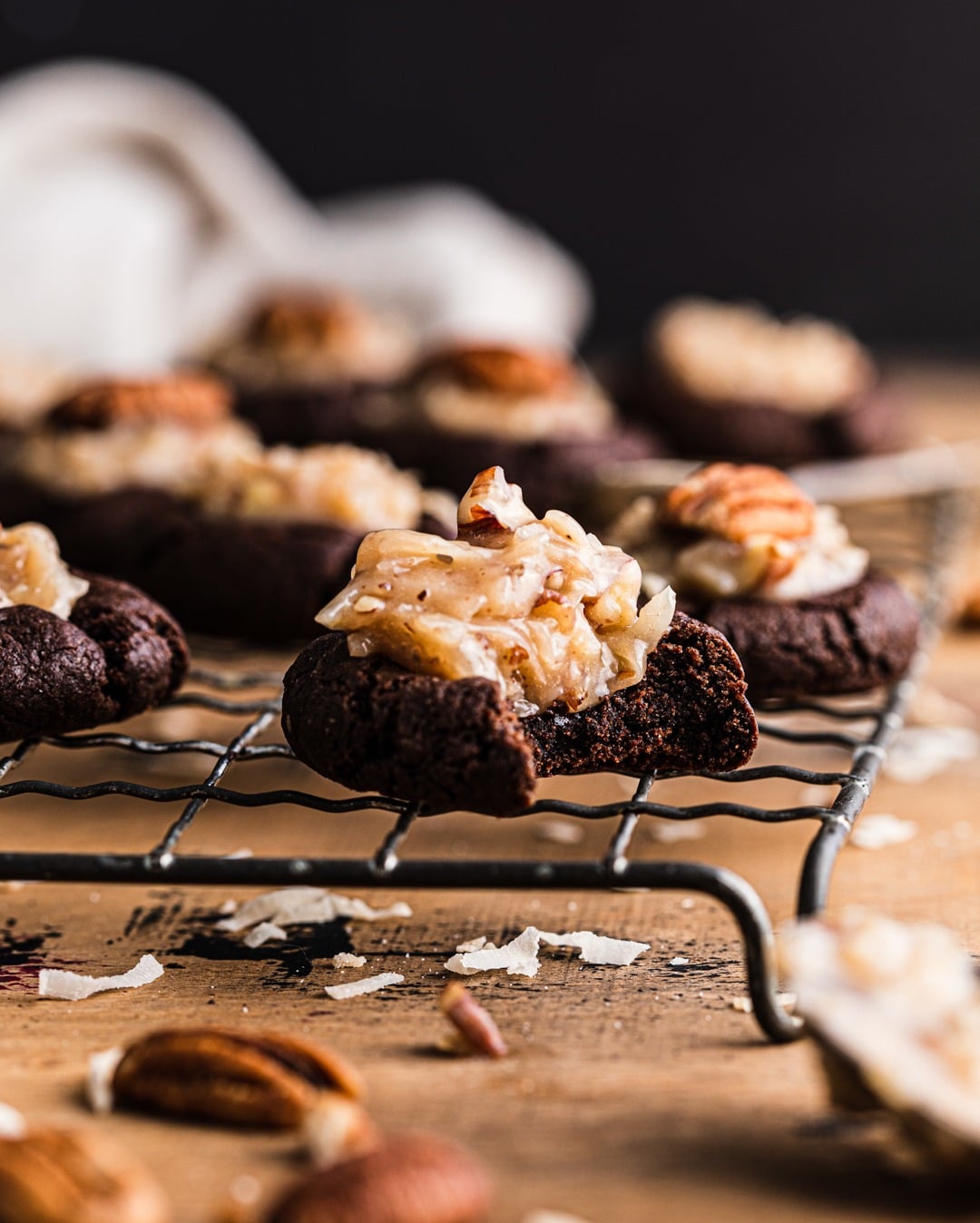 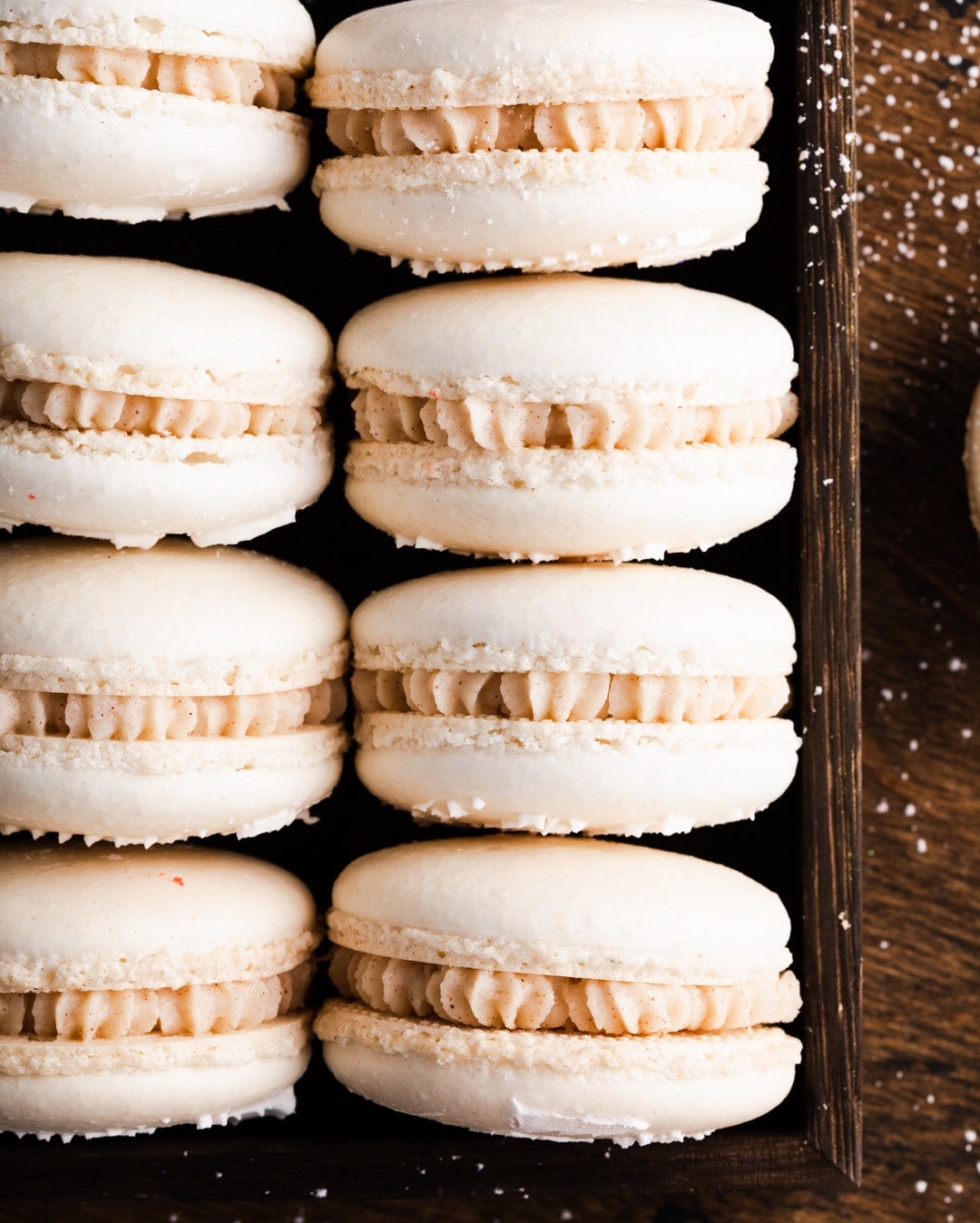